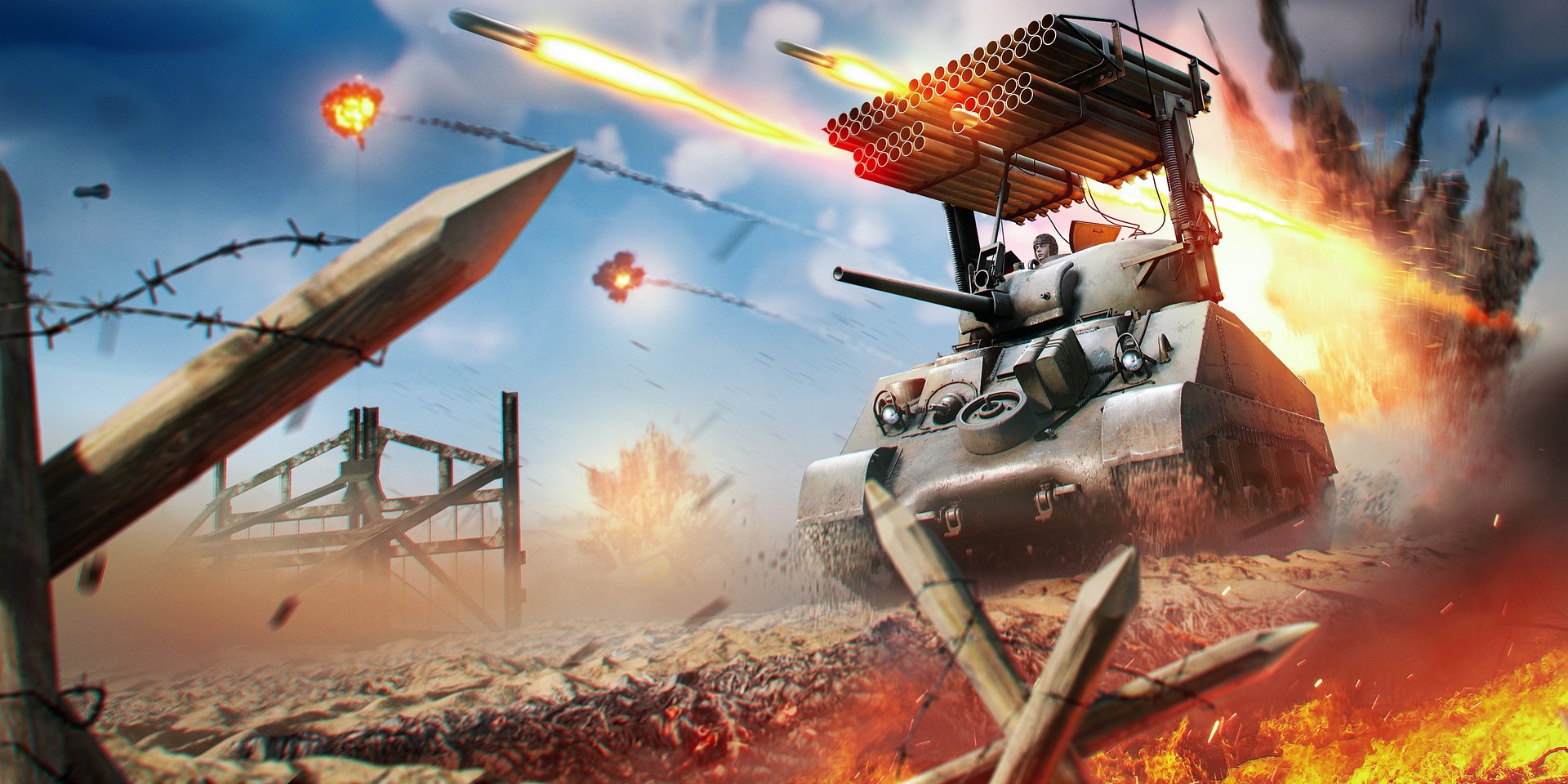 Gaijin Entertainment and Darkflow Software announce the release of a major update "Burning Sky" for  Enlisted, the online shooter dedicated to World War II battles. It brings rocket tanks, as well as other new types of weapons and equipment in all five campaigns, new weather effects, a new "Confrontation" game mode, new missions, and a custom mission editor.
The American Calliope rocket tank is basically the legendary M4 Sherman tank with an extra 114mm rocket launcher on top. Using it, players can quickly turn the positions of enemy manpower into a blazing hell, and a tank gun will help cope with enemy vehicles. The German counterpart, the Panzerwerfer 42, uses a lightly armored platform and is additionally equipped with a machine gun that is good for dealing with infantry. Finally, the BM-8-24 is the well-known Katyusha, but with smaller rockets and on the chassis of the T-60 light tank that allows it to operate at the front lines.
Other new types of weapons and equipment include ABC-36 and StG-44 automatic rifles with sniper scopes, Mosina M91 / 30 and Kar98k rifles with barrel-mounted cumulative grenade launchers, the Suomi submachine gun, Mosquito FB.Mk.VI and Breda 88 (P.XI) attack aircraft, and more.
In the new “Confrontation” mode, both teams actively attack, trying to shift the dynamic front line. You can play on the defensive and calmly grind down the advancing enemy units, or you can rely on a powerful all-in frontal assault and crush the enemy in their stronghold. In addition, new missions have been added to all campaigns – for example, the cornfields-surrounded "Village of La Perelle" in Normandy and the gloomy "Railway Bridge" in the Berlin suburbs.
With the release of the update, players have gained access to the mission editor along with the Enlisted game client on PC (missions created by other users can also be played on consoles). It’s now possible to take any Enlisted location and transform it beyond recognition by changing the landscape, moving, adding and removing objects, and then create the mission itself. The editor allows players to not only manipulate spawn zones, capture points and their settings, but also to modify the mission rules. For example, you can create a mission on a large map, in which players will fight through several cities. Custom missions will be available on a special Mod Portal that launches at the same time as the update. There the players can both spread their own creativity, and try other people's missions.
Finally, the game has more options for weather conditions and time of day. Now a battle might take place at sunset, with the soft lighting of the setting sun, or on a clear cloudless day, during a raging thunderstorm, a snowstorm or sandstorm. New rain and lightning effects and new cloud generation technology make bad weather more convincing.

About Gaijin EntertainmentGaijin Entertainment is the developer and publisher of the online games War Thunder, Crossout, Enlisted, CRSED: F.O.A.D. and Star Conflict as well as other PC, Mac, Linux, PS4, PS5, Nintendo Switch, Xbox One, Xbox Series X|S, iOS and Android titles across several genres. The company’s diverse portfolio has received a range of mass media and game industry awards including such as Gamescom Award and many more. Official website: http://gaijinent.com/