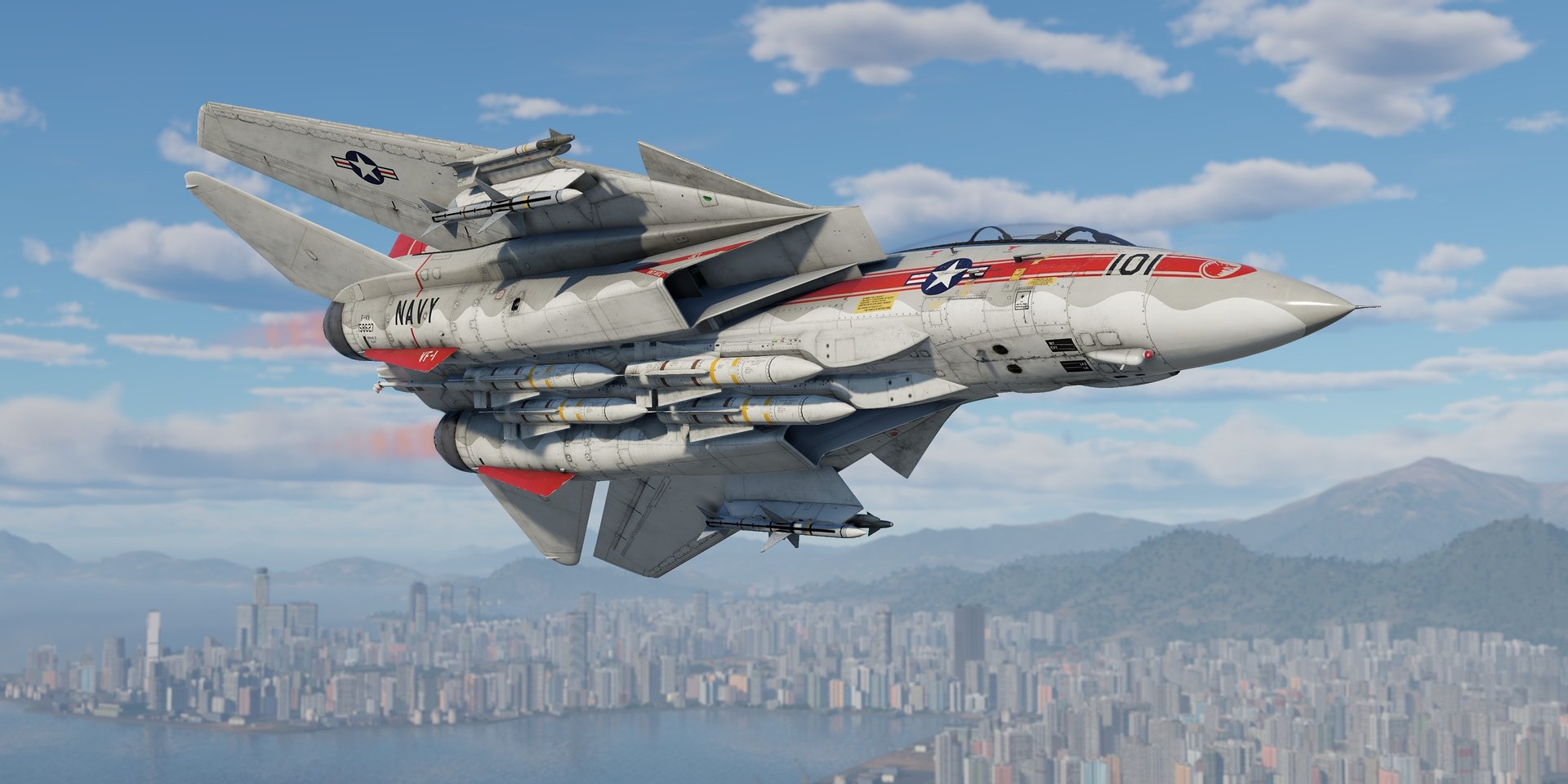 Gaijin Entertainment announces that the online military action game War Thunder will receive a major Danger Zone content update in mid-June. For the first time ever, players will be able to take to the skies in the long-awaited F-14 Tomcat, legendary US fourth-generation fighter jet and star of the popular Hollywood movies. The update will introduce dozens of other types of military vehicles ranging from the battlecruiser HMS Hood to the exotic South African G6 Rhino self-propelled howitzer. New “Abandoned Town” and “South-Eastern City” maps will also be added to the game.
The F-14 is a twin-engine variable-sweep wing jet fighter that was in service with the US carrier-based aviation from 1974 to 2006. American F-14s took part in the wars in Vietnam (in the final stages), Iraq and Yugoslavia. In addition, the F-14 fighters are still in service with the Iranian Air Force – these machines were tested in action on the fronts of the Iran-Iraq war, where they scored dozens of air victories.
The first modification of the F-14 in War Thunder will be the F-14A, equipped with an excellent set of air-to-air missiles. In addition to the Sparrow AIM-7E and F, as well as the Sidewinder AIM-9D and G that are already familiar to the players, the F-14A will feature the AIM-9H (a further development of the G version) and the AIM-54A Phoenix, a long-range missile with an active radar guidance system (both missiles will appear in the game for the first time). In addition, the F-14A has a 20mm M61A1 cannon with a rotating barrel, as well as bombs and unguided rockets in case it needs to attack ground targets.
The battlecruiser Hood was commissioned into the Royal Navy in 1920, becoming the largest warship in the British Navy. Eight 15 inch guns are capable of inflicting devastating damage to any enemy, including battleships. The main caliber is supplemented by an auxiliary battery of seven twin 4 inch all-purpose guns, as well as 40mm guns, machine guns and torpedo tubes. Due to its size and powerful armament, the ship was nicknamed the “The Mighty Hood” and became a symbol of the power of the British Empire, but at the beginning of World War II, she was tragically sunk in battle with the German battleship Bismarck.
The G6 Rhino is a self-propelled howitzer on a wheeled chassis with a 155mm gun that can quickly change position and unleash huge high-explosive projectiles (regular and with remote fuzes) on the enemy. The large caliber and weight of the explosives allow even  inaccurate hits to cause significant damage from the blast wave and overpressure.
The Danger Zone update will also introduce other new features, including two new vehicle tech trees, as well as new graphical and weather effects. Detailed information about this will be available on the game's official website in the coming weeks.
More about the update: https://warthunder.com/en/news/7705-development-f-14a-tomcat-into-the-danger-zone-en

The next update for Best Forklift Operator – an Early Access title – brings the game closer to the full release!

Developers from Setapp and publishers from Gamedust are releasing a new update for Best Forklift Operator, a title that made its debut on Steam as Early Access this April. The game's fourth update introduces, among other things, a third warehouse along with an open space...

Get behind the wheel of a new forklift in Best Forklift Operator!

The developers at Setapp and publishers at Gamedust are introducing the third update to Best Forklift Operator, a game that currently is in Early Access on Steam.

The Free Market has come to Crossout Mobile