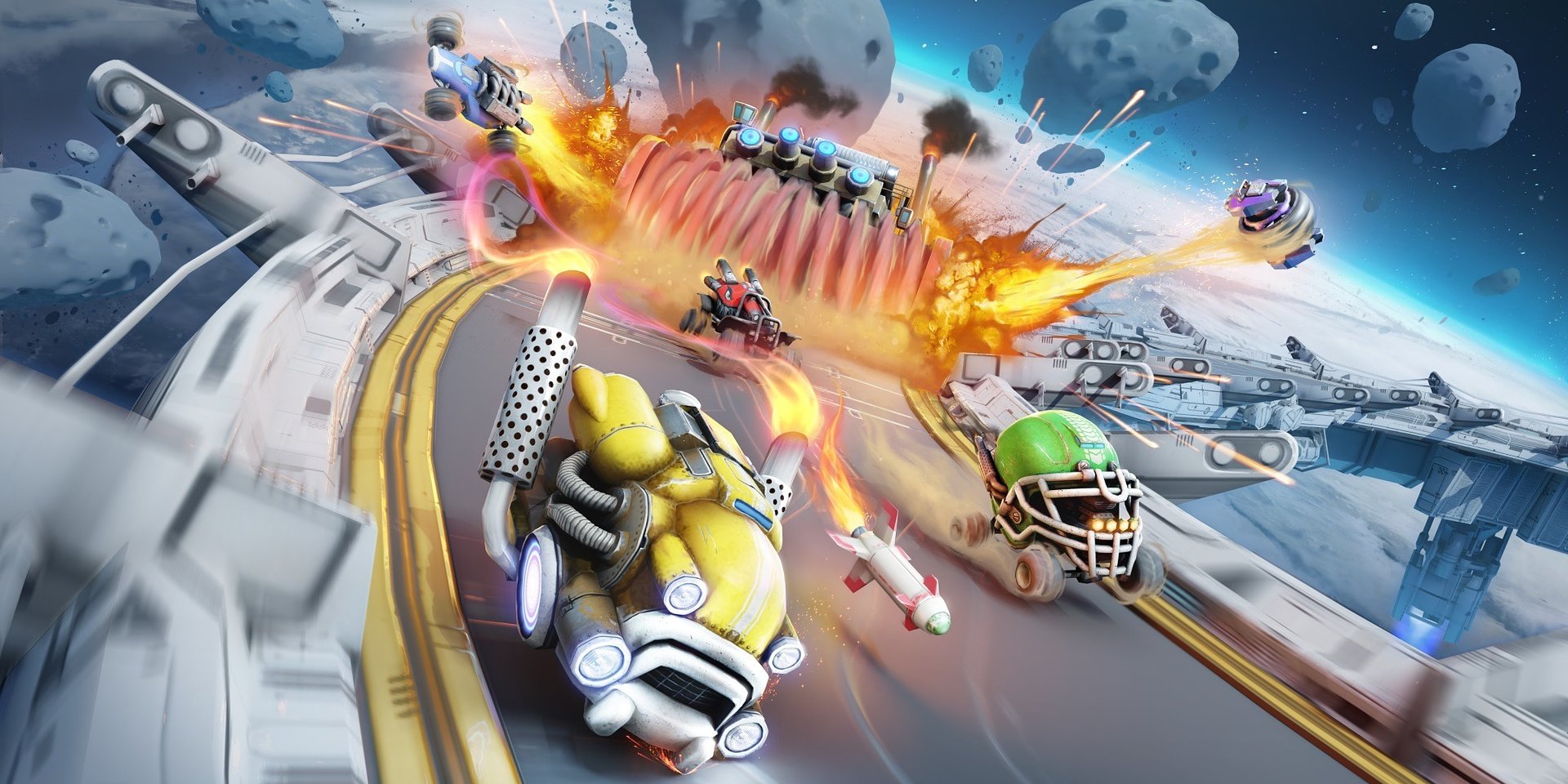 Enter the world of ruthless and fun futuristic racing

Game page with trailer: https://www.oculus.com/experiences/quest/3890197214406211
Gaijin Entertainment announces that BlazeRush: Star Track, a fast-paced top-down racing combat game, is now available at Meta Quest Store. BlazeRush: Star Track is a dynamic arcade-style action racing game in an original space-themed setting with both local and online multiplayer support. Each player chooses a car to their liking and chases, blows up and cuts opponents off.
Weapons do not deal actual damage in BlazeRush: Star Track, but they are used to push enemies off the track, thus clearing a path to victory. The player who has fallen off the track, returns in the last place. There are plenty of weapon power-ups in the game and they have direct physical effects. Using them, players can push, throw, stun, or slow down their opponents.
A VR player is placed in the center of the track, and all the action is happening right around him, roughly at the waist level. This point of view allows one to play the game comfortably and feel like a real god of racing.
The original BlazeRush game was one of the first 30 games for the Oculus Rift platform. The game was also included in the starting lineup of the Oculus GO platform. BlazeRush: Star Track is developed exclusively for the Meta Quest platform and features significant upgrades to the game engine, as well as Cloud Storage and Rich Presence support for Quest. The game is optimized for Meta Quest 2 but is also compatible with the original Quest.
BlazeRush: Star Track includes dozens of cars and tracks from from the original BlazeRush and new content developed specifically for the Star Track edition, like a new campaign (with 30 missions), new type of vehicles (spaceships), a new map and new types of weapons (lasers, mines and chain lighting).

About Gaijin Entertainment
Gaijin Entertainment is the developer and publisher of the online games War Thunder, Crossout, Enlisted, CRSED: F.O.A.D. and Star Conflict as well as other PC, Mac, Linux, PS4, PS5, Nintendo Switch, Xbox One, Xbox Series X|S, iOS and Android titles across several genres. The company’s diverse portfolio has received a range of mass media and game industry awards including such as Gamescom Award and many more. Official website: http://gaijinent.com/

Now you can play Best Forklift Operator on the steering wheel as well!

Are you looking for a job in game dev? Meet up with QLOC at Digital Dragons 2022!

Digital Dragons 2022, one of the biggest venues for game dev in Central and Eastern Europe, will take place on May 16-17, in ICE Kraków Congress Centre in Cracow, Poland. It’s a great opportunity for networking and participating in lectures led by experts in game dev. Th...

Undoubtedly, the COVID-19 pandemic has changed the world and irreversibly affected our daily lives and work culture. Published in November 2021 report "Flexibility of Professionals and Managers on the Labor Market", conducted by Antal and Cushman & Wakefield, clearly...