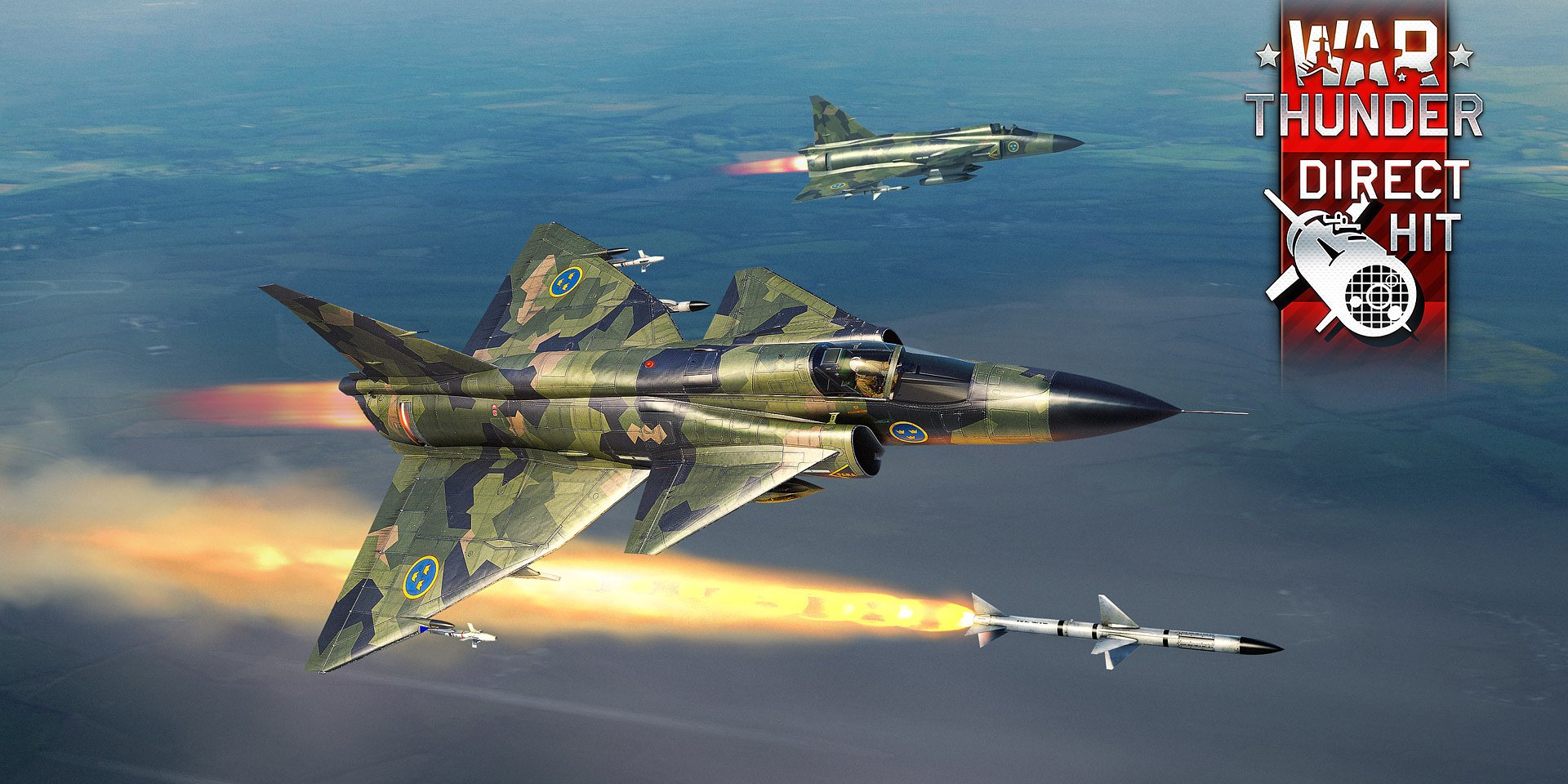 Gaijin Entertainment announces that the “Direct Hit” major content update for the military online action War Thunder is available already. It makes the game better in all aspects. New content like the Soviet attack jet MiG-27M with guided bombs, Swedish interceptor JA37C Jaktviggen, US heavy cruiser USS Pittsburgh and  Italian IFV C13 T90 will provide new experience, new visual effects and upgraded 3D models of existing vehicles will make the game look better, while user interface updates will make it more user friendly. War Thunder also got the support of the version 2.2 of NVIDIA DLSS technology that brings high quality and high resolution graphics without sacrificing FPS performance.
JA37C Jaktviggen is a fighter-interceptor from a Viggen family of jets that were supplied for service in the 1980s and became a “calling card” of the Royal Swedish Air Force for a long time. The fighter's unusual airframe design, efficient flaps and air brakes allow it to make quick turns with very good roll speed. The JA37 version of Viggen was developed to fulfill the tasks of a fighter-interceptor, so the main emphasis in the weapons list is placed on the air-to-air missiles, including the completely new RB71 with radar guidance, a huge launch range and G-tolerance of about 30G.
The ‘Direct Hit; update also brings realistic and better looking effects of water interacting with physical objects like bullets and shells. Ammunition storage explosions and ship fires are also updated. Aviation fans should check the new look of the iconic B-17 bomber planes. The number of polygons on the updated models tripled, and the textures became 4 times larger.
The range of maps for the combined battles of ground and air vehicles was also expanded. “Spaceport” is based on the map from the “Warfare 2077” April Fools event and offers more open fighting grounds surrounding the confined city center. “Breslau”  is focused on urban combat and the design was inspired by the Siege of Breslau (Wrocław) which took place in the final months of WWII. The naval battles also got an important improvement: fire control system adds aiming reticule, UI hits for each gun’s status and a convenient lead marker.
Finally, the update also officially adds content created by War Thunder players as part of the revenue share program. Timur “_PtaXa_” Taniya  developed the detailed cockpit model for the German He 111 H-16 bomber, while Daniil "Joy_Division__" Zaytsev created the German flying boat BV 138. Detailed explanation of revenue share rules is available here.
The full list of changes in the update is available at the official War Thunder website.

About Gaijin Entertainment:Gaijin Entertainment is the developer and publisher of the online games War Thunder, Crossout, Enlisted, Cuisine Royale and Star Conflict as well as PC, Mac, Linux, PS4, PS5, Nintendo Switch, Xbox One, Xbox Series X|S, iOS and Android titles across several genres. The company’s diverse portfolio has received a range of mass media and game industry awards including such as Gamescom Award and many more. Official website : https://gaijinent.com

About War Thunder:War Thunder is a free-to-play, cross-platform, massively multiplayer military masterpiece with millions of fans worldwide, that allows players on PC, PlayStation®4, Xbox One, Mac and Linux to fight their way across air, land, and sea in the same battlefield. War Thunder offers 1,700+ playable aircraft, armored vehicles and ships from the early 1930s to the 2000s. The US, Soviet, British, German, Italian, Japanese, Chinese and French military vehicles represented in game are carefully researched, historically accurate recreations of their real world counterparts. Fans can expect hundreds more added as Gaijin Entertainment commits to ongoing development via regular updates. Official website: https://warthunder.com/