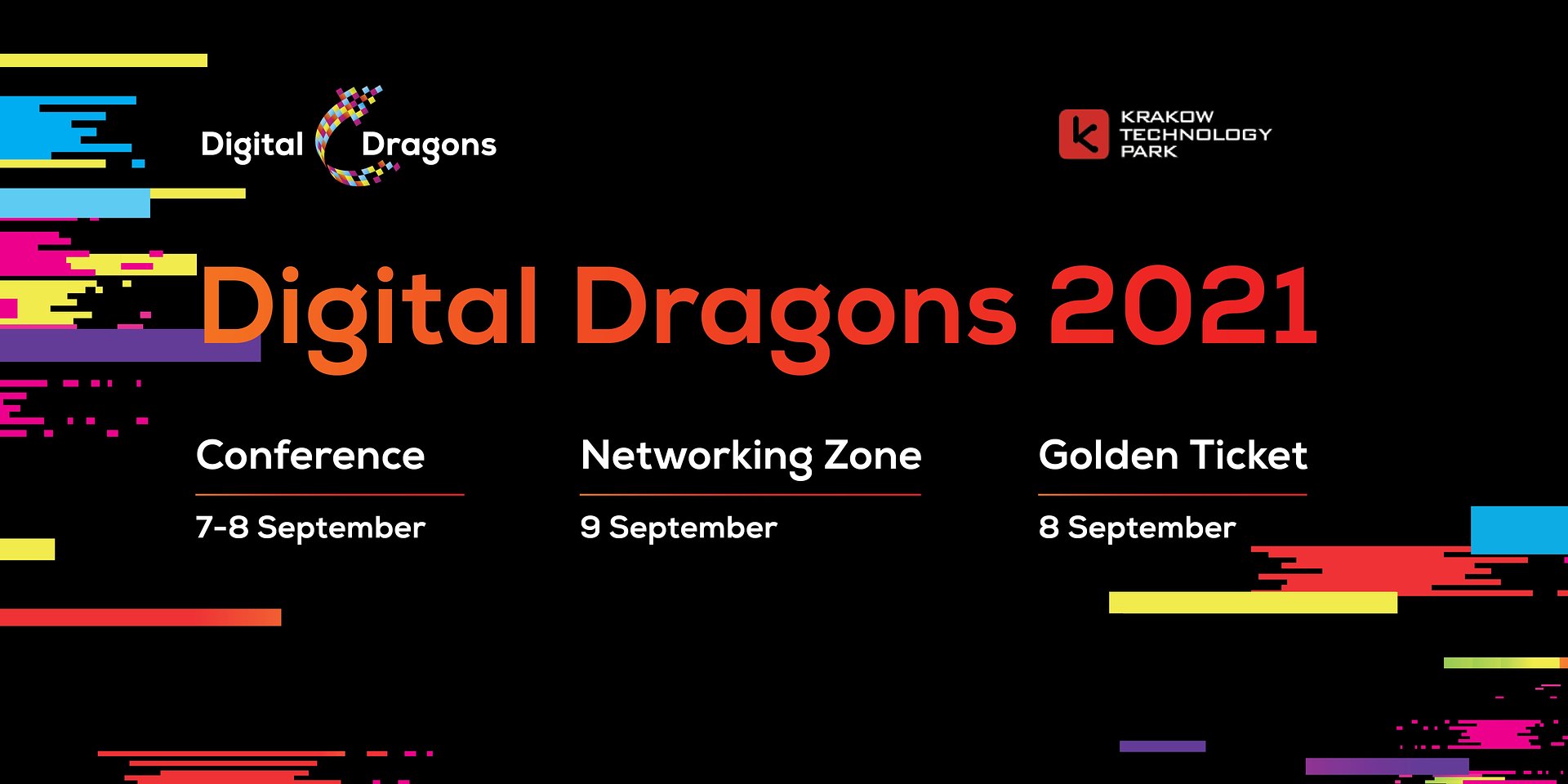 The next edition of Digital Dragons, the leading European B2B games industry conference, starts tomorrow. The event's first and second day will be held entirely online. All lectures, discussion panels, recruitment meetings, and access to job offers is free of charge and will be hosted online through Pine.

Register for free or buy ticket to Digital Dragons!
This year, the team behind Digital Dragons has prepared a rich offer for participants with Regular Tickets which everyone can get for free. Over 60 different and interesting talks, lectures, and panels conducted by industry specialists from around the world. All events scheduled for the first two days will take place online on the Pine platform. After logging in, participants can view the schedule of lectures taking place simultaneously on four stages. During each lecture hour, attendees can choose from four different panels to attend to. You can also dynamically move between the scenes to satisfy your curiosity and see what’s happening during the other lectures taking place at the same time. After each lecture you can participate in a Q&A session, so it is worth noting your questions down.
Digital Dragons is the perfect opportunity to take the next step in your career in the games industry! As part of the free registration option, those taking their first steps in gamedev or thinking about changing jobs, will have the opportunity to speak directly to game companies looking for employees. Meetings will be visible in Pine’s menu. Simply select available slots to meet with specialists from BoomBit, SoftServe, and PixelAnt Games. It's a good idea to visit the "Job offers" tab before the interview to get a good starting point for your conversation.
Additionally, Digital Dragons promoters have prepared a special Expo Zone on Pine. Virtual stands allow for direct contact with the representatives of the event’s sponsors. The list of the company’s participants is visible in the side menu at each booth. This way you can set up a face-to-face meeting or start a chat to learn more about the company, its products or job offers. During Digital Dragons, representatives of such companies as 11 bit studios, Sperasoft, Unreal Engine, or Innogames will be available for conversation.
Log in to Pine if you already have your ticket
Those who decide to purchase a business ticket allowing them to arrange meetings, can do it in a convenient way via Pine. All you need to do is log in, go to the "My Meetings" section, and send an invitation for a specific time to the person you would like to talk to online during the conference or in person on September 9 at the Krakow Technology Park.
The second day of the conference will conclude with the Digital Dragons Awards for the best Polish games and the best foreign game of 2020. Among the local projects competing for statuettes we will find Cyberpunk 2077, Ghostrunner or Carrion, while foreigns ones feature titles such as The Last of Us Part II, Ghost of Tsushima or Hades. The broadcast is scheduled for September 8 at 8 PM CEST.
On the last day, September 9, the hosts have planned a live networking meeting. All interested attendees can meet face-to-face in the Krakow Technology Park to celebrate this important industry event. The team behind Digital Dragons has made sure that after long months of limiting direct contacts, people can meet in a friendly atmosphere. The business meetings will be accompanied by a series of lectures and, in the intermission, a barbecue and beer sponsored by Unreal Engine.
The complete programme of lectures and panel discussions is now available on the official website.
Types of tickets:
Register for free or buy ticket to Digital Dragons!
For more information you can also directly contact Digital Dragons:Sabina Misiarz-Filipek – sfilipek@kpt.krakow.pl
Useful links:
Digital Dragons – official website
Digital Dragons – Facebook
Digital Dragons – Twitter
Digital Dragons – LinkedIn
Digital Dragons – YouTube

About partners:Województwo Małopolskie is the main partner of the event. The regional authorities implement a number of projects that serve the innovation and economic development of Małopolska and its attractiveness to investors. Małopolska is a perfect location for conducting business, especially based on new technologies.

Krakow is a modern metropolis with over a million people working in it. Krakow is 140 thousand students, 23 universities, over 200 international corporations employing nearly 80 thousand people in sectors such as finance, IT, services, research and development, business analytics. We base the development of the city, among others on intelligent management and strengthening the sector of modern services and research and development. That is why we focus on innovation and effective cooperation between science, business and local government. SoftServe is the Gold Sponsor of the event. It is a team of over 600 people experienced in areas such as VR, AI, Machine Learning, Big Data, as well as core software development, Experience Design, DevOps, and many others. The company is present in five locations in Poland – Wrocław, Gliwice, Białystok, Poznań, and Warsaw. SoftServe is more than technology and ideas – it is a place where talented and ambitious people can develop their passion!PixelAnt is a Gold Sponsor of the event. Together with Sumo Group, it works on some of the most recognizable high-end AA+/AAA game brands (like Forza Horizon, Hitman, and Sackboy) and collaborates with some of the biggest partners in the gaming industry (Microsoft, Sony, Nvidia, AMD, Intel, WB). This year the company is launching its own IP based on the Unreal Engine. Nothing is impossible for this brand!

BoomBit is a Gold Sponsor of the event. It is one of the largest worldwide mobile game developers and publishers. They publish their own, internally developed games as well as projects created in cooperation with studios from around the world. They're a group of highly experienced development, publishing, UA, Ads monetization, and BI professionals. At BoomBit they create games with passion, realizing their dreams of bringing entertainment to hundreds of millions of users from around the world, from the USA to China. Among their hits are hyper-casual titles such as Ramp Car Jumping and Slingshot Stunt Driver, and mid-core games like Hunt Royale and Idle Inventor. They build their own production and sales tools, which allow them to release high-quality games with optimized monetization potential. Let’s publish a game together!About Digital Dragons:Digital Dragons is currently one of the largest international events for the digital entertainment industry in Central and Eastern Europe. The main goal of the Digital Dragons is to create a Business to Business (B2B) cooperation platform within the Polish games sector, one of the most intensively developing sectors of the creative industries. Last year’s edition of the Digital Dragons, held online for the first time, attracted 2900 participants, including 1100 companies from 65 countries. Among the representatives of the digital entertainment industry, there were leading Polish and foreign companies. 366 projects from 30 countries were submitted to the two contests: the Indie Celebration and the Digital Dragons Indie Showcase, while media coverage reached over 1.5 million people. In 2021, the Digital Dragons will be held online as a series of events organised from May to September.About Kraków Technology Park:Kraków Technology Park (KPT) has contributed to the development of proper conditions for the development of entrepreneurship for 20 years. For 10 years it has managed the Technology Incubator for IT start-ups. The KPT inspires the start-up community by organising numerous events including workshops, hackathons, and conferences that help to verify business concepts. Besides these, it runs KPT ScaleUp acceleration programme. Companies may count on the support of seed funds, tax reliefs offered by the Polska Strefa Inwestycji (Polish Investment Zone) programme, and preferential office space rental conditions. The KPT is particularly focused on Industry 4.0 and the video games industry. It is the leader of the hub4industry consortium aiming to provide comprehensive support for companies wishing to implement Industry 4.0 solutions. The KPT also organises Digital Dragons – the leading games industry event in Europe. The KPT also works with the international EIT Digital, which aims to drive the digital transformation in Europe.