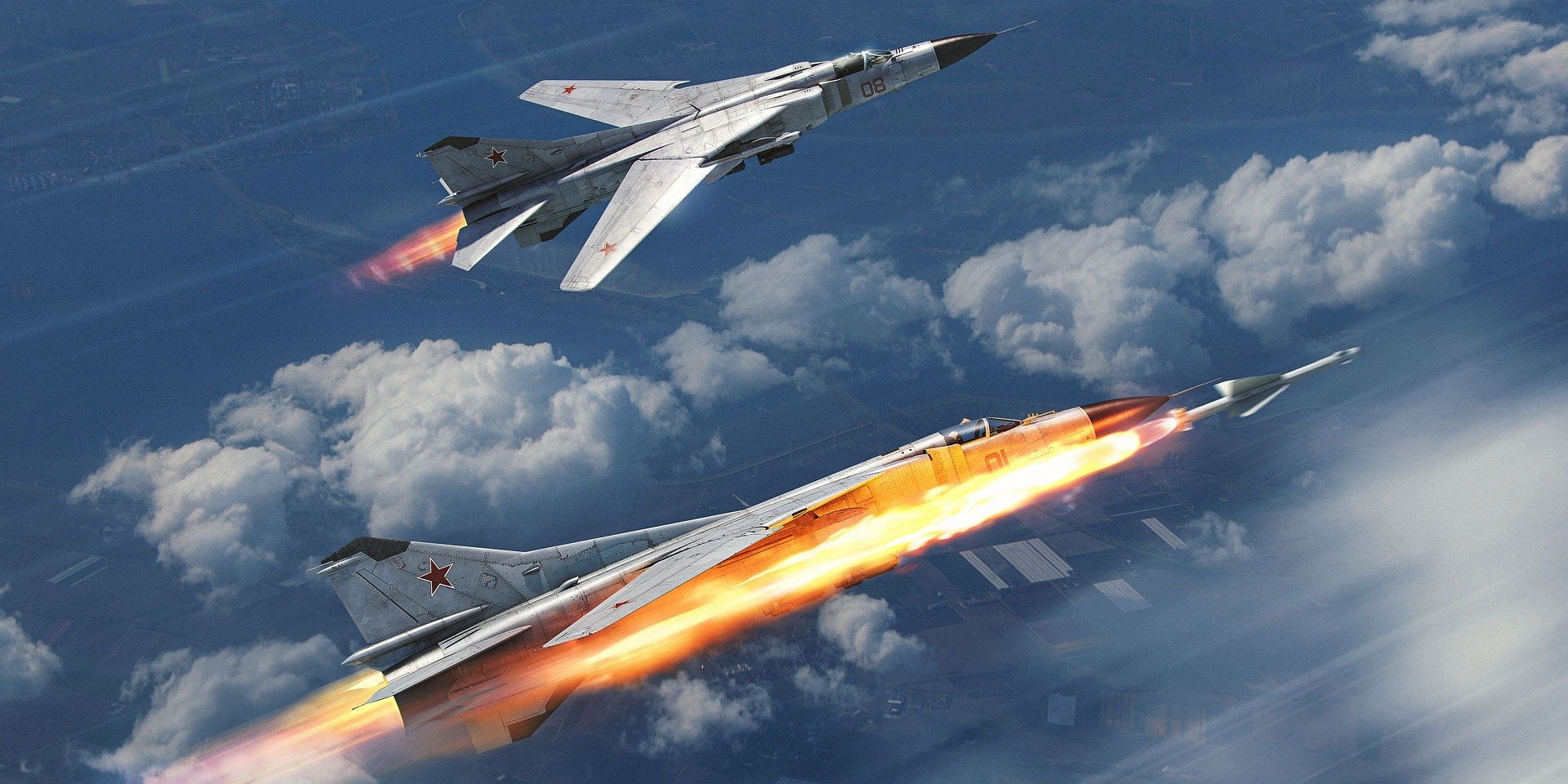 Gaijin Entertainment announced that the military online action War Thunder added a new major Content Update “Red Skies”. It adds rank VII aviation to the game, including the Soviet MiG-23M and the Chinese J-7E fighter jets, as well as dozens of other military vehicles, i.e. Soviet Yak-28B tactical bomber, modern Russian T-80BVM tank, German Marder A1 APC, Franko-Finnish ITO 90M SAM and Italian Dante Alighieri battleship. Currently there are more than 2000 real ground, air and naval war machines in the game! The nuclear blast effect allows now to realistically destroy buildings in real time. The latest update also adds two new maps (Red Desert and Sunken City), and commander sights for ground vehicles that are actually equipped with such a device in real life are now fully simulated.
The MiG-23M is the most modern aircraft in the Soviet/Russian tech tree and is currently the fastest fighter jet in the game. It has a variable sweep wing with three positions and a maximum speed of Mach 2.4. The MiG-23M brings down enemies with a twin autocannon, bombs, rockets and air-to-air guided missiles, including the new R-23R with its radar homing head and and the R-23T with a thermal seeker. The MiG-23M infrared search-and-track device is capable of capturing the thermal signature of an operating engine from an enemy aircraft at a very large distance and covertly launching a missile without alarming any enemy radar warning system.
The introduction of rank VII aircraft is a major step for War Thunder that will allow the game to move forward from Vietnam war era signature fighter jets, like MiG-21 and  F-4 Phantom II, and gradually add even more contemporary machines in future updates.
The T-80BVM is an upgrade of the old Soviet T-80BV tanks to the level of the modern T-72B3 and T-90M MBTs. The modernization includes an up-to-date fire control system with a duplicate sight for the commander, and the ability to operate the 9M119 tandem ATGMs, as well as the "Relikt" ERA pack instead of the outdated "Kontakt-1". Thanks to the latter, the protection of the vehicle from HEAT and AP projectiles has been significantly increased.
The “Red Skies” update also brings the thorough simulation of a nuclear blast effect. This allows the player to watch the blast leveling buildings in any map from various points of view. The new algorithm generates the nuclear mushroom, condensation domes and the blast wave that realistically interacts with the sky and objects on the map. Tactical nuclear weapons were added to the game in the “New Power” update and are available in arcade and realistic battle modes to the best performing players. In a situation when the team fights poorly as a whole, a single hero can farm enough points to respawn in a strategic bomber and bring victory to their side with one single successful strike.
The latest update also adds a few minor but quite useful mechanics, like the naval shell chase camera or the ability to help your teammates with firefighting in the vehicle.
Full information on the “Red Skies” Update is available at the official website: https://warthunder.com/en/news/7200-news-meet-major-update-red-skies-en

About Gaijin Entertainment:Gaijin Entertainment is the developer and publisher of the online games War Thunder, Crossout, Enlisted, Cuisine Royale and Star Conflict as well as PC, Mac, Linux, PS4, PS5, Nintendo Switch, Xbox One, Xbox Series X|S, iOS and Android titles across several genres. The company’s diverse portfolio has received a range of mass media and game industry awards including such as Gamescom Award and many more. Official website: http://gaijinent.com/About War Thunder:War Thunder is a free-to-play, cross-platform, massively multiplayer military masterpiece with millions of fans worldwide, that allows players on PC, PlayStation®4, Xbox One, Mac and Linux to fight their way across air, land, and sea in the same battlefield. War Thunder offers 1,700+ playable aircraft, armored vehicles and ships from the early 1930s to the 2000s. The US, Soviet, British, German, Italian, Japanese, Chinese and French military vehicles represented in game are carefully researched, historically accurate recreations of their real world counterparts. Fans can expect hundreds more added as Gaijin Entertainment commits to ongoing development via regular updates. Official website: http://warthunder.com

Green Hell: The Board Game is nearing its Kickstarter campaign – learn the core rules and setup!

The start of the Green Hell: The Board Game campaign on Kickstarter is fast approaching. Almost 5 000 people are already waiting for the project's launch. On this occasion, the developers from Galaktus Games have prepared a series of videos presenting the mechanics and r...