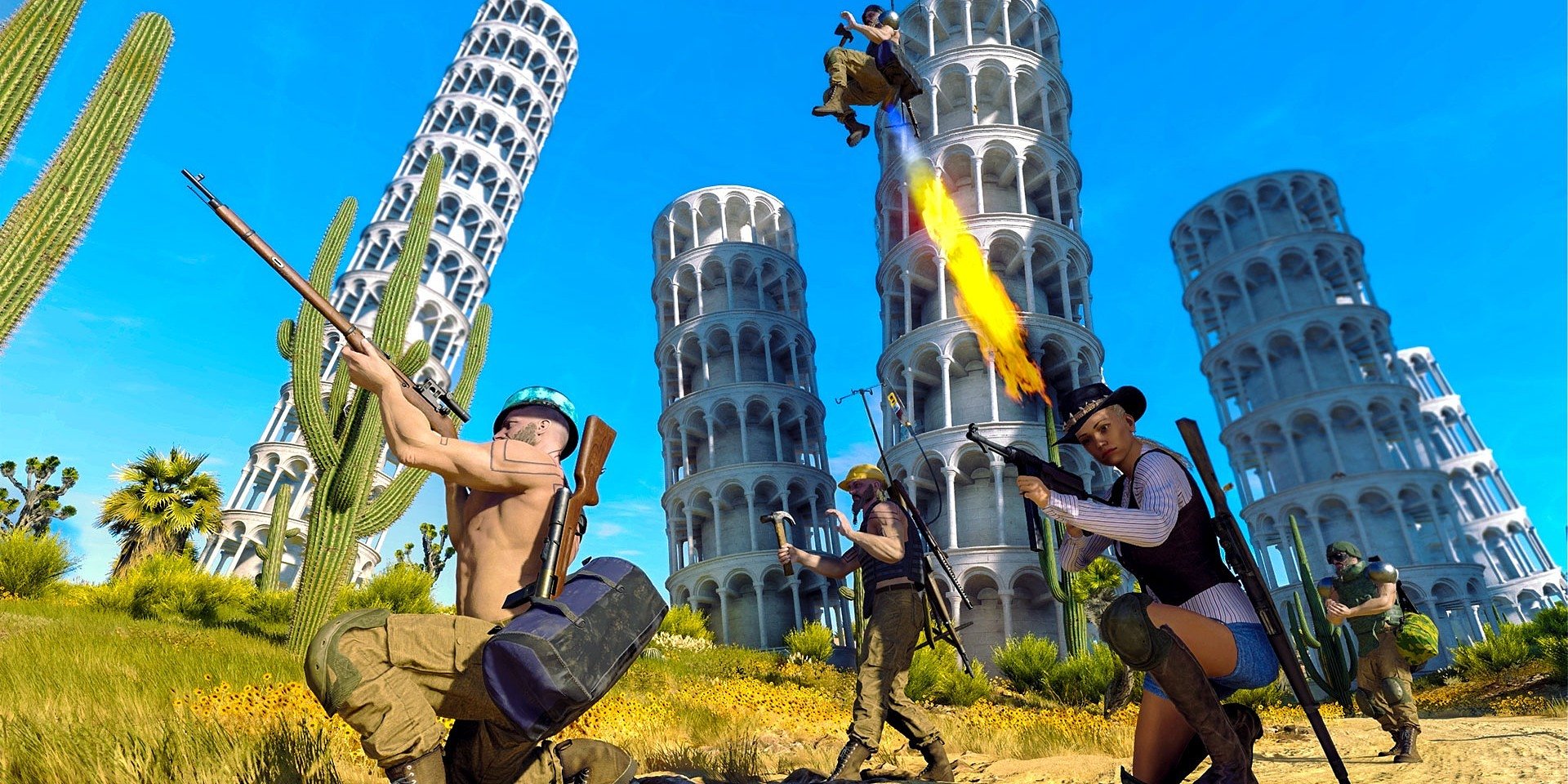 Gaijin Entertainment and Darkflow Software announce that this April, the brutal online shooter CRSED: F.O.A.D. players will switch to ecologically sustainable fuel and will learn how to construct buildings. The new mode is called Field Approved Rocket Testing Knight or simply F.A.R.T. Knight and is now available to everyone.
Last Friday night CRSED: F.O.A.D. developers decided to try some games that are similar to their own project and are among the most popular battle royale titles. This analysis allowed them to pinpoint a huge segment of shooter players that prefer skyscraper constructing to actually shooting things. In order to bring this new audience to CRSED: F.O.A.D., a similar mechanic has been added to the game as part of the new F.A.R.T. Knight mode, but with a twist. As the ugly modernist architecture does not fit well into the rich visual style of CRSED: F.O.A.D., our designers turned to really timeless classical masterpieces, such as the Leaning Tower of Pisa.
F.A.R.T. Knight building mechanic demonstration
Further analysis, though, led to another unexpected revelation. It turned out that another significant portion of the audience say that a particular area of the lower part of their body hurts a lot when they see the skyscrapers.
“When I see an enemy and rush into a firefight, and he or she s**ts out a skyscraper, my backside is so on fire that I could probably reach the stratosphere” – commented one of the players that chose to remain anonymous.
F.A.R.T. Knight flying mechanic demonstration
In order to break the fourth wall between the player and the game, F.A.R.T. Knight mode will introduce a new mechanic that converts the player’s inner fire into a powerful jet stream that propels their game character into the sky. Each time one the Champions consumes food, they generate a special bio-jetpack fuel that allows them to fly high, get on the top of those Pisa Towers and punish their builders.
The environmentally and socially responsible F.A.R.T. Knight’s bio-jetpack also reminds us that fossil fuels should be replaced with sustainable analogs in order to save the planet.
More information on F.A.R.T. Knight and CRSED: F.O.A.D. is available at the official website: crsed.net

About CRSED:CRSED is a brutal online shooter featuring melee weapons, firearms, magic rituals, supernatural powers and a great dose of humor. Fight on the most picturesque corners of earth against the odds and be the last man standing. The game receives regular updates and is available for free on PC, PlayStation 4, PlayStation 5, Xbox One and Xbox Series X|S. Official website: https://crsed.netAbout Gaijin Entertainment:Gaijin Entertainment is the developer and publisher of the online games War Thunder, Crossout, Enlisted, Cuisine Royale and Star Conflict as well as PC, Mac, Linux, PS4, PS5, Nintendo Switch, Xbox One, Xbox Series X|S, iOS and Android titles across several genres. The company’s diverse portfolio has received a range of mass media and game industry awards including such as Gamescom Award and many more. Official website: http://gaijinent.com/About Darkflow Software:Darkflow Software is a game studio founded in 2016 by video game industry veterans and is located in Riga, Latvia. Currently, the company is working on the squad based multiplayer WW2 shooter Enlisted and online shooter CRSED: F.O.A.D.

What? You didn’t know that there’s a secret Roman Baths dungeon deep down under the Viking Age map? Maybe because we’ve just updated your game with it for free!

War Thunder, the military simulation game is expanding to a younger audience

The new concept is being tested via the Tailspin event

The product is utilised to test promising military technologies