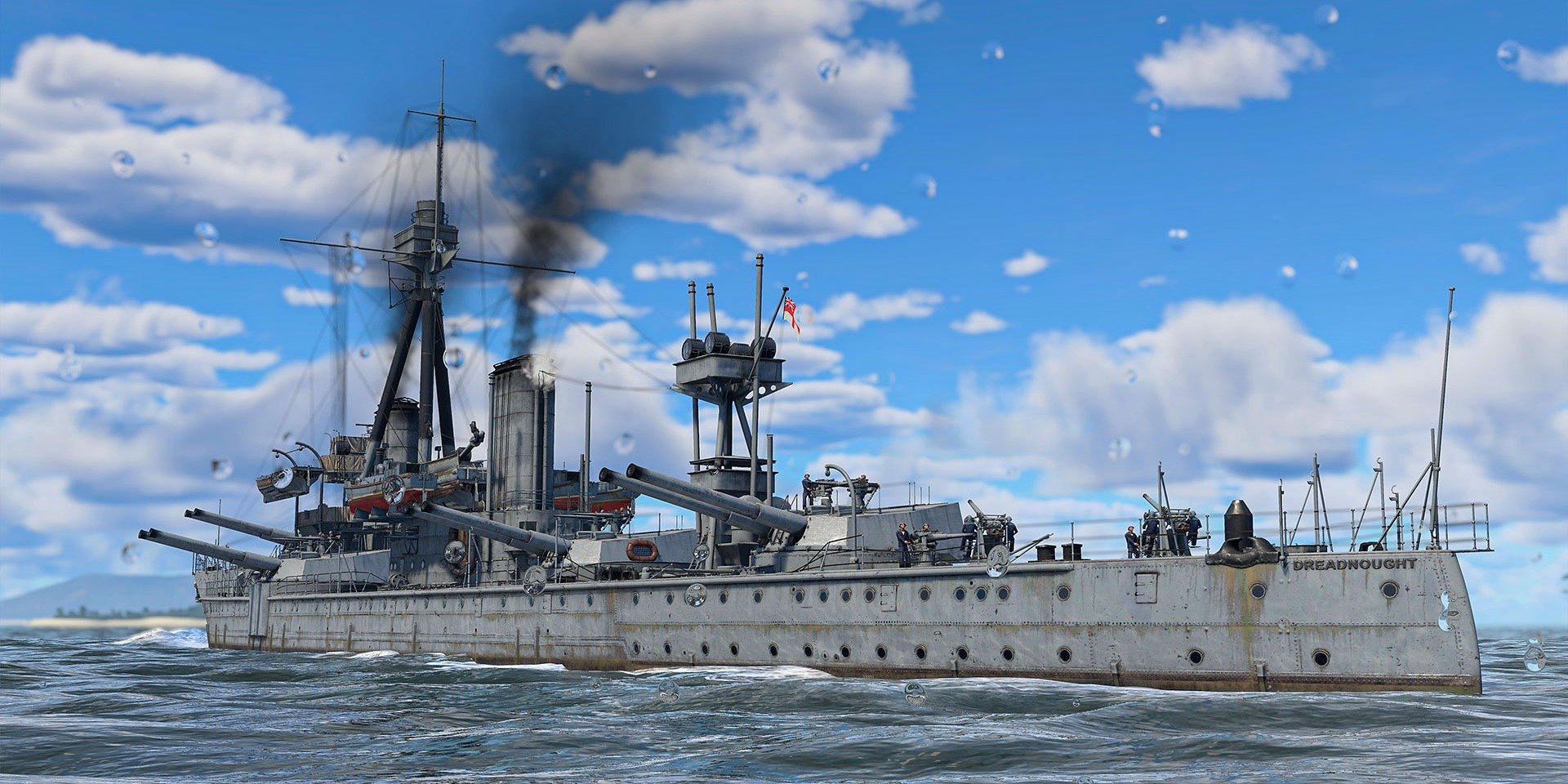 Battlecruisers and battleships, including HMS Dreadnought, will join the battle

Gaijin Entertainment announces that the next major Content Update will bring battlecruisers and battleships. The Blue-water fleet with destroyers, cruisers and battleships will become the fifth type of military hardware in War Thunder, along with ground vehicles, aircraft, helicopters and coastal fleet.
War Thunder naval battles began with clashes of light and fast coastal forces ships, like torpedo boats, gunships and submarine chasers. Other types of ships including frigates, destroyers and cruisers were added to War Thunder later. The “New Power” update will bring colossal battlecruisers and battleships boasting heavy armor and large calibre guns.
These large ships will include the British battleship Dreadnought, the German battleship Westfalen, the US heavy cruiser New Orleans and many other famous ships. Dreadnought is probably the most famous from the list. The construction of this battleship at the beginning of the 20th century made fleets from other nations obsolete because of two key features: an "all-big-gun" armament scheme, with an unprecedented number of heavy-calibre guns, and steam turbine propulsion. Other countries rushed to counter this threat with similar war machines and as a result a whole generation of battleships from that era was commonly referred to as “dreadnoughts”.
The gameplay experience was always quite different for small and large vessels and this difference will only increase when the battleships arrive in the game. This is why the fleet tech trees will be split into two separate trees – coastal fleet and blue-navy fleet with separate progression schemes. Players will be able to use any ships they’ve already unlocked and to train existing ship crews to use any other ships. This decision will allow newcomers that are interested only in larger ships to skip small vessels altogether, start with destroyers and get to cruisers and battleships faster, while the developers will get more freedom to choose the ships for the upcoming updates. War Thunder massive naval battles will still involve all types of vessels from both  coastal and blue-navy fleets meaning that fast torpedo boats and gunboats will fight together with large ships and aircraft to achieve team victory.
More information on fleet restructuring in War Thunder is available at the official website: https://warthunder.com/en/news/6915-development-fleet-research-changes-and-the-first-battleships-en

About Gaijin Entertainment:Gaijin Entertainment is the developer and publisher of the online games War Thunder, Crossout, Cuisine Royale and Star Conflict as well as PC, Mac, Linux, PS4, Nintendo Switch, Xbox One, iOS and Android titles across several genres. The company’s diverse portfolio has received a range of mass media and game industry awards including such as Gamescom Award and many more. Official website: http://gaijinent.comAbout War Thunder:War Thunder is a free-to-play, cross-platform, massively multiplayer military masterpiece with millions of fans worldwide, that allows players on PC, PlayStation®4, Xbox One, Mac and Linux to fight their way across air, land, and sea in the same battlefield. War Thunder offers 1,700+ playable aircraft, armored vehicles and ships from the early 1930s to the 2000s. The US, Soviet, British, German, Italian, Japanese, Chinese and French military vehicles represented in game are carefully researched, historically accurate recreations of their real world counterparts. Fans can expect hundreds more added as Gaijin Entertainment commits to ongoing development via regular updates. Official website: http://warthunder.com

Get your share roguelike action on the go! Wicked cartoon bullet hell - The Crackpet Show, is heading for Nintendo Switch!

Go solo or team up with up to 4 players and take on the role of gunned up and insanely freaky animals ready to gut up enemies just to gain fame in the World’s Biggest bullet-hell Show!

Embracer Group AB ("Embracer"), through its wholly owned subsidiary Koch Media GmbH, has today entered into an agreement to acquire 100 percent of the shares in the Poland-based Flying Wild Hog ("FWH") from Supernova Capital LLP. Flying Wild Hog is a renowned and growing...